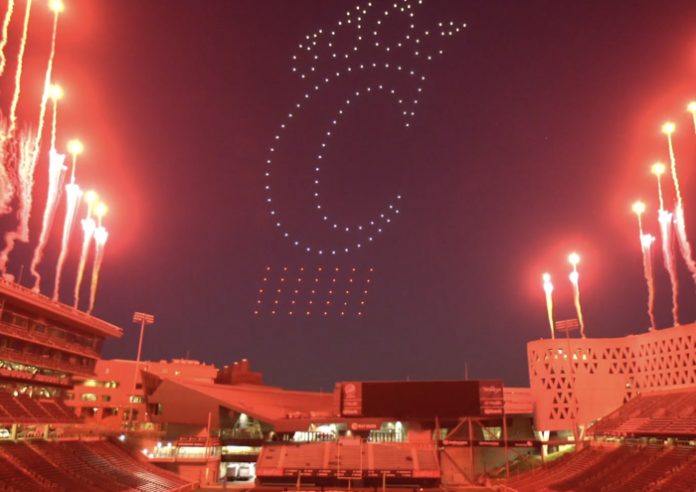 The Cincinnati Bearcats celebrated the end of an incredible winning season with an awesome 150-strong Verge Aero drone display, put on for the team by their sponsors and with fans invited to join the fun.

Taking place at Cincinnati’s 38,000-seater open-air Nippert Stadium, which is the Bearcats’ home field, Verge Aero’s military-grade-manufactured drones were perfectly positioned high above the crowd to spell out the team’s 13-0 winning season and display their logo. Backing up the show were more than 100 lighting fixtures and 384 rooftop fireworks, creating a spectacular celebration show.

Verge Aero’s Chris Lutts project managed the drones for the event, in collaboration with the University of Cincinnati Bearcats events team, their sponsor’s event team, and lighting and fireworks specialists.

“We actually only had around seven days to get our drones programmed, transported and event-ready for this show,” says Lutts, “and this included responding to the client brief, discussions about messaging, collaborating with the lighting and pyrotechnics teams and making it all happen. But we love a challenge at Verge Aero – in fact we have a strong record of pulling off dynamic, large drone events in a short timeframe!”

Lutts and his team responded to the event’s requirements by showcasing Verge Aero’s fully integrated hardware and software systems, which are designed to create and deploy shows quickly. “We’re keen to realize shows with minimum hassle for our clients,” Lutts continues. “And I’m thankful that we designed our drone systems in this way, allowing us to create custom content and program in lighting quick time.”

With scores, statistics and branding at the core of the drone messaging requirements, Lutts’ team and the team sponsor generated dynamic cues and displays within Verge Aero’s Effects Engine. This allows them to create patterns and imagery that can be seen from practically any perspective, so that the UC football team and the crowd in the stadium could clearly see what the drones were displaying above them. The drones were programmed and operated on the night by Verge Aero’s Mason Hayes.

“Ending the drone display with the 150 drones choreographing into the Bearcats logo, alongside the fireworks and light display, was an incredible finale which resulted in the crowd going wild,” add Lutts. “Our team worked brilliantly with the other teams and their event sponsor to pull off a very special season-end send off. Local and state press picked up on the story, adding video footage of the event to their coverage the following day. It was a historical season for the Bearcats and I’m thrilled we helped them celebrate with a memorable display.”

It is the latest in a long line of big event projects from Verge Aero, which have recently included highly intricate drone shows for President Biden’s victory party, US Armed Forces Day and American Independence Day celebrations.