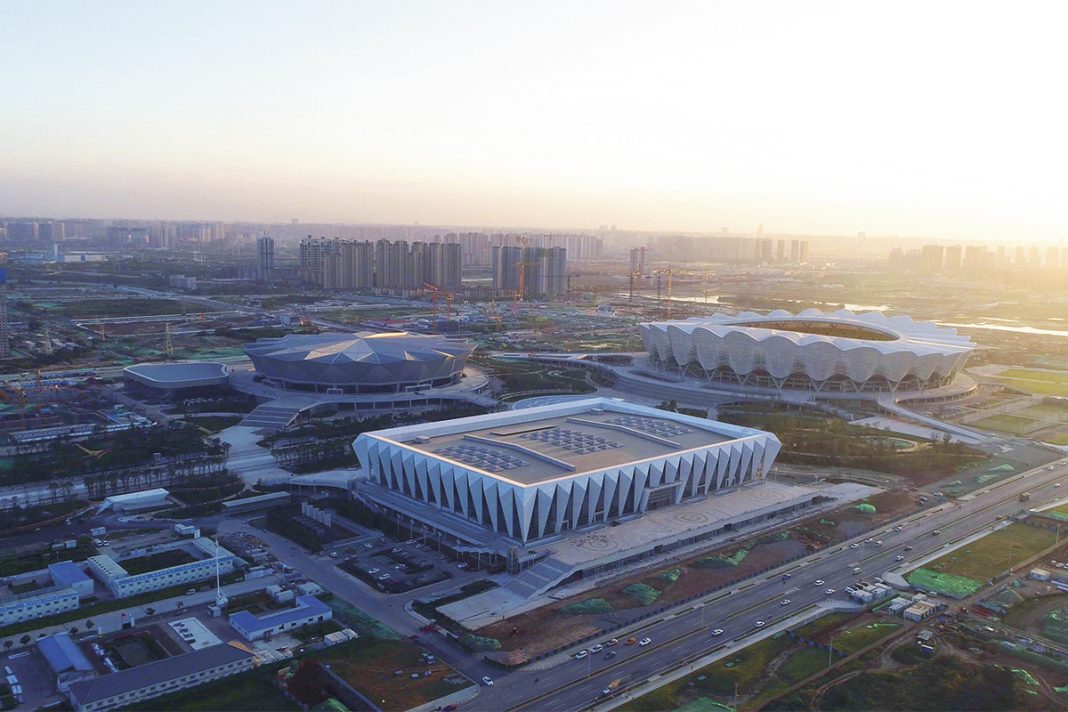 When construction began on the Xi’an Olympic Sports Center, home of China’s 14th National Games, officials wanted the modern venue to feature a state-of-the-art audio system that would give every seat a memorable experience. With help from pro audio distributor, EZPro International, officials found the solution they were looking for in products from EAW, Powersoft, Allen & Heath and Symetrix.

Completed in July 2020 with a total build cost of $1.12 billion, the Center occupies an area of 866,667 sq metres and houses three distinct venues: a 60,000-seater athletics stadium with track and field facilities, a gymnasium capable of seating 18,000 people, and a swimming and diving hall that accommodates 4,000 spectators. After the 14th National Games draw to a close, the centre will transition to hosting international sports events, exhibitions and conferences in addition to acting as a multi-function sports centre for nearby cities and towns.

With a strong grounding in the Xi’an pro audio industry for more than two decades, and an established reputation for providing reliable, high-end products, EZPro won the bid to start work on the project, installing a sound system that fit the brief of ‘world-class, advanced, stable, cost-effective and flexible’. “As soon as the public tender opened for bid, we submitted all the necessary documents and strived for a chance to pitch in front of the contractor and the consultant,” explained Zhou Jun, Chief Technical Engineer of the project. “The large-scale project was very demanding with a pressing schedule, so the fact that we had a branch office in Xi’an and were able to quickly respond to the contractors needs stood out as a great advantage. The substantial number of symbolic sports venue projects we have also been involved with in the past reassured the venue that we were fully capable of delivering this one to a high-quality, too. It turned out our efforts did not go to waste, and I believe we nailed the project!”

As the system was being used as an entertainment, vocal and emergency audio system, it needed to be reliable and as impactful as possible, so EZPro chose a range of manufacturers capable of adhering to the venue’s every need. “In designing the sound system, the goal was to provide the same frequency response for each listening area and to address any unevenness throughout the audience areas,” said System Designer, Zhang Xianjun. “We first built a 3D model for the stadium in AutoCAD, according to the architectural drawings. We then imported the model into EASE4.3 acoustic analysis software, followed by a 1:1 EASE model setup. We choose EAW’s RSX line array for its strong directivity, ability to optimise speech intelligibility, and its overall fantastic sound.”

“All of the loudspeakers were installed under the catwalk of the stadium, which makes it difficult to see their operational status,” added Zhang. “Thanks to the self-detection of EAW’s RSX Series active loudspeakers, the sound engineers can quickly access their operational- and signal-status. The catwalk of the stadium is an asymmetric-hexagon structure, so it is harder for us to control installation angles of loudspeaker clusters. We were able to overcome this by using EAW original flyware, fixing the arrays under the catwalk by 3T electric hoist. We used two safety cables and the horizontal coverage is adjustable. With RADIUS Series loudspeakers, we have much less sound diffusion and direct sound coverage is improved.”

EAW’s RADIUS Series is designed to streamline setup and deliver maximum results in minimum time. The line features OptiLogic to drastically cut down on setup and tuning time, while the EAWmosaic app provides total system optimisation from anywhere in the venue, plus intuitive room design and prediction in a single, comprehensive application.

“The EAW RSX Series delivers an excellent listening experience with high fidelity and extended dynamic range, while also proving Dante integration across the line,” added Zhang. “The system has admirable intelligibility, and it is easy and seamless to switch between signals to keep the system safe and sound.”

“With reliability as the most vital requirement, choosing amplifiers that were up to the immense task of driving this system was crucial,” said Yongjun Jiang, EZPro’s Technical Manager of the project. “Powersoft amplifiers have an incredible reputation, we knew them to be highly efficient and extremely reliable, not to mention their immense power output, which made them the perfect choice for us.”

EZPro wanted to avoid potential failure throughout the signal path of the audio system, which is where Powersoft’s Quattrocanali powerful DSP processing became vital. “The built in DSP modules Powersoft offer were incredibly useful, like the advanced EQ,” continued Yongjun. “And with lengthy cable runs like the ones we used for this installation; the active damping control feature was also essential.” For the diamond shaped gymnasium, sound reverberation presented another challenge, along with the need for the space to transform into a basketball court or an ice hockey rink when needed. For this area, EZPro opted for a total of 70 EAW loudspeakers, a combination of RSX212Ls, RSX18Fs, RSX129s and VFM129is. Accompanying the loudspeakers are three Allen & Heath digital mixers and two Symetrix digital processors.

“The way they are organised provide acute direction of sound and reduce any diffusion into the bleachers by the stage, which improves speech comprehension in the venue,” said Yongjun.

For these 70 loudspeakers, a single Powersoft Quattrocanali 4804 DSP+D is able to provide ample power and high-quality audio.

“Main signals go directly into the amplifiers with Dante cards before feeding the loudspeaker systems, which ensures the best signal quality. The amplifiers are capable of detecting and switching channels automatically as required, whilst dealing with all the digital and analogue signals flawlessly.”

The immense system is supported by ArmoníaPlus, Powersoft’s system design software which has been devised to allow for simplistic control of complicated installations. The software allowed EZPro to speed up the initial system commissioning phase, thanks to its loudspeaker pre-set models, and has continued to be an essential part of the system control.

With ArmoníaPlus, operators can quickly check if the amplifiers are online, their signal and temperature ranges, and they can monitor the loudspeaker impedance, whenever and wherever required.

“The clear and intuitive user interface of ArmoníaPlus is a crucial asset to the installation for daily system operation,” said Yongjun. “The offline editing functions, quick set up and group control functions are extremely practical for the install.”

ArmoníaPlus allowed EZPro to visually represent the amplifiers in their locations, thanks to its customisation features. “The amplifiers located in the four different rooms are replicated in corresponding zones in the software, arranged in actual installation order. It’s completely invaluable for operators and makes controlling this complex system intuitive,” said Yongjun.

To ensure no disruption to audio in the event of a single point failure, EZPro implemented redundancy throughout the system, from microphone to loudspeaker – and everything in-between. At the input stage, non-redundant analogue sources are patched through passive splitters to deliver discrete signals to the main and backup systems. In each of the three venues, a pair of Allen & Heath mixers are deployed, running simultaneously at all times, allowing seamless switchover in the event of signal loss. Dante outputs from the main and backup mixers feed the Primary and Secondary Dante networks respectively, with a third independent network utilised solely for control signals throughout the complex. At the output stage, amplifiers with both Dante and analogue inputs were the preferred choice for peace of mind. The Primary Dante network feeds the amplifiers directly, while the secondary Dante network output is converted to analogue – via Allen & Heath’s DT168 Dante I/O expanders – to provide a redundant signal to the amplifiers.

“The applications are supposed to be versatile, as they cater for major sports events, performances, launches etc, so this required a moving tuning position with an easy-to-use console,” furthered Yongjun. “This is why we chose Allen & Heath dLive C3500 with DM48, Avantis with GX4816 devices. They have separate racks, and they are competent in long-distance transmission, scene storage and recall.

“All three of the Allen & Heath products deployed in the install – dLive, Avantis and SQ – are built on the XCVI 96kHz FPGA engine, delivering a consistent standard of high-resolution low-latency audio across the main and backup systems, regardless of their form factor.”

For the main stadium, a dLive C3500 Surface is partnered with a CDM48 MixRack to form the main system. The dLive C3500 is the most compact dual-screen Surface in the dLive range, enabling the operator to take advantage of dLive’s intuitive Harmony UI, whilst maintaining a compact 24-fader frame size. As with all dLive systems, the MixRack offers 128 channels of input processing, with a configurable 64 bus architecture, allowing the installer to choose a MixRack I/O configuration to suit the application. For the stadium’s backup system, EZPro opted for an Avantis, a standalone mixer offering 24-faders in conjunction with 64 input channels and 42 mix busses, plus a GX4816 I/O Expander to mirror the analogue I/O of the primary system. Both the dLive and the Avantis are fitted with Dante I/O cards to integrate with the Primary and Secondary Dante networks. In the gymnasium, the main system is also built around a dLive C3500 Surface, this time paired with the compact CDM32 MixRack, with an SQ-7 employed as the backup system. The SQ-7’s 32 onboard mic preamps mirror the 32 mic inputs on the CDM32, with 33 faders on hand for control. As with the stadium, both systems integrate with the Dante networks via Dante I/O cards to provide redundant Dante feeds to the gymnasium’s Powersoft amplifier rack and EAW loudspeakers.

The choice of Allen & Heath’s flagship dLive system in the stadium and gymnasium was in no small part down to the modular nature of the system, and the flexibility this offered when it comes to the location of the surface. “In the main stadium and gymnasium, there is no openable observation window in the control room” noted Zhang. “As the dLive audio engine is in the MixRack, we can confidently change the location of the Surface when required. We can effectively reduce the risk of control interface crashing, and at the same time meet the requirements of a flexible tuning position, ease-of-use and fast setup.”

In the natatorium, where visibility is not an issue, a pair of SQ-6 mixers are deployed as the main and backup mixer, with Dante cards fitted to both for redundancy of the networked audio, again feeding the Powersoft amplifiers and EAW loudspeakers. For the natatoriums more modest requirements, the SQ-6’s 24 onboard mic preamps, feeding the 48-channel / 36-bus mix engine, was sufficient to meet current and future requirements.

With the facility now open for business, the design and installation of the system was viewed as a resounding success by all involved. “The schedule was pressing, yet the sound system installation and commission were finished on time thanks to EZPro’s efforts,” said Zhou Jun, Chief Technical Engineer of the stadium project. “Third-party experts were invited to provide feedback, and they returned a high recommendation. The delivery was accepted without any doubt, and it meets the high Chinese standards for fabulous technical performance.”